A free fibre-optic connection for every address in the city

The smart city of the future would be inconceivable without a fibre-optic network. But constructing such a network throughout the city requires serious investment, and there are a host of factors that affect the planning and implementation of such a project. L2Fiber Rotterdam is facing this challenge head on, and within five years the company will have rolled out fibre optic throughout the City of Rotterdam.

After a long preparation phase “with many sleepless nights”, as Director Henk Hoven of L2Fiber Rotterdam BV puts it, in November they broke the ground for a fibre-optic network that will offer total coverage across Rotterdam. A small concrete installation unit has been erected on Oostzeedijk Beneden in Kralingen. The concrete walls will eventually be neatly finished in brick. Hoven explains that we’re looking at what is known as a POP: a Point of Presence. This POP, secured with a steel door, will soon be filled with network equipment. Fellow director Oscar Kuiper explains that between 10 and 12 of these utility buildings will be needed throughout Rotterdam.

Before our tour of the first physical manifestation of Rotterdam’s fibre-optic network, the two owner-directors met me in a cafe on Oostzeedijk to explain exactly what the project will do. Both have been involved in fibre optics since 2000, initially as employees of different companies and since 2009 with their own firm, Oono (the name is based on the Dutch for ‘independent network operator’). This company installs fibre optics at individual businesses or business locations, connecting them to the ‘backbone’ of the fibre-optic network. “To connect to the main network, the backbone, you need to install and program the right equipment,” Kuiper explains. “That’s where we come in.” Through their company Boono (‘backbone independent network operator’), Kuiper and Hoven also own and manage around 700 km of backbone.

A fibre-optic network is constructed in three layers. The first layer is the fibre optics themselves; let’s call that the highway. Then there’s a transport layer with the network equipment: the lorries. The third layer is the cargo, the data that gets transmitted across the network. This third section is the responsibility of the service providers who offer various subscription options to consumers. L2Fiber will provide all of Rotterdam with both the first and second layers.

In fact, there is already a ring of fibre-optic cables around Rotterdam. This network is used by businesses and public institutions and operates under the name Glazen-Maas. The Nesselande district and the Lloydkwartier even have a fibre-optic network with connections to residential properties, known as FTTH (Fibre To The Home) locations. Hoven and Kuiper are building on this achievement by extending the fibre-optic network to every single street and address in Rotterdam.

Laying a fibre-optic network across an entire city means digging up roads all over the place and that an engineer will have to visit every single residence. This requires a big financial investment, before you even get to the logistical challenge. Green Giraffe, a financial consultancy that specialises in green projects, has helped attract a backer to fund the project to the tune of €200 million. The connection to the network is offered free of charge to residents, which can’t help but raise questions about the sustainability of the business model. “Providers pay us to use the network, and they then pass those costs on to the consumer who takes out a subscription with them. In a way, we’re levying a toll.” So now we’re talking about a toll super-highway. “It doesn’t get much more complicated than that!” Kuiper laughs. 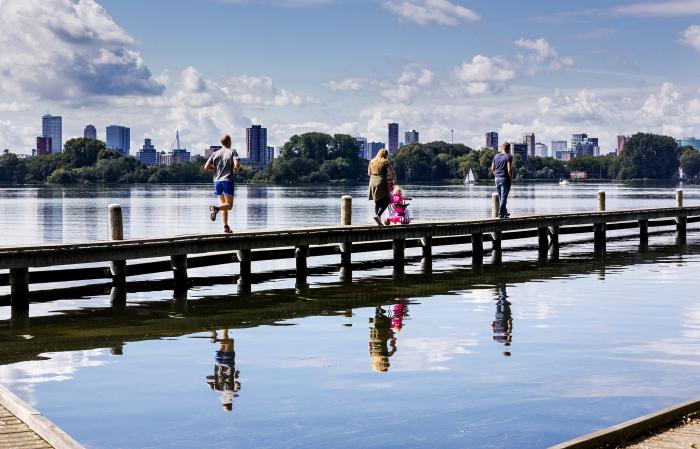 The neighbourhood Kralingen where it all started with a pilot project

A covenant has been signed with the City of Rotterdam that sets out agreements regarding the implementation and the permit arrangements for the groundworks. The biggest feature of these negotiations is that all Rotterdam residents will get a fibre-optic connection in their homes, together with a router to go in their meter cupboards. “We’ll be knocking on 300,000 doors.” Neighbourhood information evenings have been organised to make sure people are well informed and to build trust, and the City Council has also published an information leaflet. L2Fiber has created its own leaflet which explains in layman’s terms how the connections are laid and the benefits users can expect. The leaflet also lists six providers that are offering subscriptions. Broadcaster TV Rijnmond dedicated a piece to the project, and a tram is currently driving around with an advert on its side. But, in the end, it's down to individuals to open their door to us. If an engineer cannot enter a property for any reason, the current or future residents will have to pay a hefty sum if they want to connect to the fibre-optic network in the future. As an added reason to go ahead, the leaflet states that deciding to connect later is likely to cost between €500 and €1,500. Ultimately, L2Fiber is aiming to connect at least 90% of Rotterdam addresses.

Van Gelder Telecom has been contracted for the implementation phase. Van Gelder has already completed a fibre-optic project for 40,000 homes in neighbouring city Schiedam, so they are experienced in scheduling the work and communicating with residents. Residents can make appointments online, and they have the option to cancel up to an hour before the appointment time. Schiedam has achieved 94% coverage.

The transition from copper wire to fibre optics is also great for the environment. Data traffic over fibre-optic cables uses 80% less energy, which would translate into savings of 8.5 gigawatt hours every year in Rotterdam. That’s equivalent to the energy generated by eight wind turbines.

Of course, the great advantage of fibre optics is that you get much faster data speeds for the same or even a lower price, Hoven explains. “You really are getting more for less. The standard price will fall dramatically.” And whereas with the old broadband network, uploads always take longer than downloads, with fibre optics they will run at the same speed.

Fibre-optic networks have such a huge capacity that it is possible to offer secure private channels in addition to the open internet connection, which would be of interest to hospitals and others. These private channels cannot be hacked from the outside. The L2Fiber router currently includes four ports for separate connections, but this could easily be expanded to 16 in the future.

Finally, the practically inexhaustible capacity of fibre optics and the potential to create multiple private connections are bringing Rotterdam ever closer to the Smart City ideal. “Every fifth lamppost on a street could be fitted with a sensor,” Kuipers suggests, “that would send different data streams to different services – number plates to the police and available parking spaces to a parking service, for instance. Our platform can create an extremely intricate data network.”

If everything goes to plan, within five years Rotterdam will have full fibre-optic coverage. That’s 5,000 connections a month. The Kralingen project is a pilot, in which 15,000 connections will be made in eight or nine months. “Kralingen is a test run for all of us: for our company, for the contractor and for the City authority. Once the course has been set, we can go full steam ahead.” An age-old Rotterdam image that now represents a technological leap forward.

L2Fiber is happy to help you with all of your questions. Please visit their website to get in touch. Interested in Rotterdam's smart city program? Send an email to Smart City manager Frank Vieveen.