Landscape in the city

Plein06 designs are based on climate change adaptation and happiness. The Rotterdam agency has a unique vision for the city's further densification. Ideally it should go hand in hand with water storage, energy generation, green spaces and... happiness.

From their offices on the first floor of the Groot Handelsgebouw, you have a great view of the busy Stationsplein square and the 'shark's fin' of Centraal Station. plein06 has been designing here since 2006, explains architect and partner Robbert Jan van der Veen and landscape architect Linde Elsinga. The employees see and feel what a well-functioning public space means for a city every day of their working lives.

plein06 identify their field of work and design approach with three concepts: urban planning, landscape and strategy. "Half of our people come from Wageningen University, our landscape designers. The other half come from TU Delft, our urban planners," continues Van der Veen. "But we are mainly looking to integrate urban planning and landscape, which means bringing landscape into the city and building elements into the landscape. Sometimes we actively opt for this contrast by challenging ourselves to introduce landscape elements to the city and vice versa. This is our strategy."

A few years ago, plein06 included wellbeing and happiness in its design approach. The LDE InnovationLAB 'The Happy City' seeks to deepen knowledge in cooperation with students and researchers in the fields of philosophy, urban sociology, economics, psychology and urban planning, and with businesses and governments. "It tackles questions such as: How do we boost wellbeing and happiness in a metropolitan environment? What does a sense of neighbourhood mean and how do you create it? We incorporate the insights gained into our projects, with the emphasis on metropolitan densification projects." 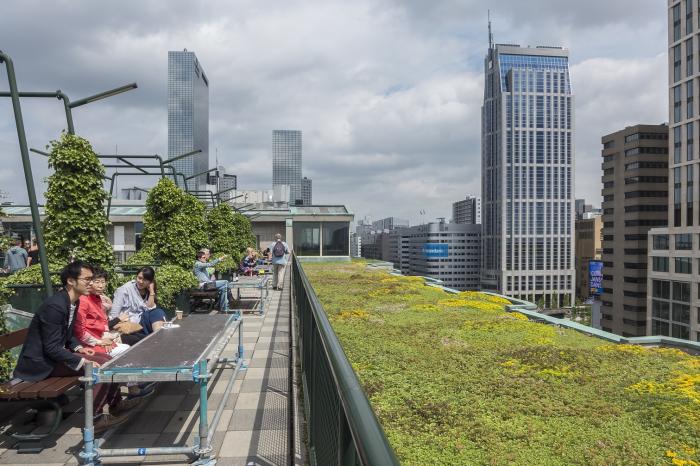 Urban densification, that will also affect Rotterdam over the next two decades, will become an exciting, complex urban planning puzzle. The policy choice was made not to let the landscape around the cities erode any further. Old business parks, dockyards and marshalling yards in the city will be transformed into residential areas or mixed living/working districts. How can we retain quality of life in the city when there are more buildings and more people? "Even though it already seems quite densely packed, we think it is desirable to create bigger landscapes in the city." Is there still room for that? Van der Veen outlines that we should not only see 'landscape' in the flat surface of the city. Green roofs have a distinct place in the concept, but that's not the end of the story either. "The City of Rotterdam's Roof Plan is essentially good, but there are opportunities to get more from it." Elsinga explains: "Anchor the roofs in the public space. Soften the hard dividing line between public space and buildings that currently exists."

The concept of plein06 is about making connecting routes from green space on the ground to greenery on the roofs. "By cleverly linking canals, parks, flowerbeds, playgrounds and green roofs and also by going straight through buildings. You can create larger lobbies with green spaces or green courtyards instead of corridors, and wide glass stairwells that make the route to the roof garden visible from the outside."

The restoration of a landscape structure in the city has a precedent in Rotterdam, according to Van der Veen. The Water Plan drawn up by city architects Rose and Scholten was implemented in 1854. It is to this plan that Rotterdam owes its beautiful canals, such as Westersingel, Heemraadsingel, Essenburgsingel, Statensingel, Bergsingel. Until the Reconstruction period following the bombardment of May 1940, Westersingel continued on from Centraal Station as Diergaardesingel. Diergaardesingel was later filled in. However, there are still pipes under Kruisplein and Weena that hold the old water structure. Elsinga: "Our idea is to uncover this water structure again - not so much to physically restore the canal but to show that it was there. Under Kruisplein there is enough water storage space for 2.4 million litres. It would be wonderful to make it visible."

As good as a forest

This idea is part of plein06's plan for climate change adaptation in the Rotterdam Central District; the core economic area around Stationsplein and Weena. The abbreviation RCD will then read as Rotterdam Climate District. It is now a very harsh environment dominated by high-rise buildings, which is associated with insufficient water storage, heat stress, inadequate air quality and wind nuisance. The designers interpreted the integral improvement of the area with the objective of "making living conditions there as good as in the forest". Very ambitious and slightly experimental, Van der Veen knows, but this comes with a very outspoken intention.You can take the forest as the standard for measurable changes. "Only 10-15% of the rain from a rain shower in a forest flows away - the rest is absorbed by the ecosystem. In the city, these ratios are the other way around. From this you can derive a standard, for example to design the street and roofs so that at least 55% of the precipitation in the area is absorbed."

Elsinga suggests that in our design, as with Coolsingel, Weena should become car-free and be redesigned with green strips, a water permeable surface and water elements in conjunction with the Hofplein fountain. A spray fountain could be installed in the water storage under Kruisplein.

In terms of 'opening up' buildings and cutting them through with semi-public routes, the designers at plein06 are inspired by their own work premises, the Groot Handelsgebouw. "This building is a city in itself", according to Elsinga. "All functions are present: living, recreation, hospitality, a nursery, shops, etc." Van der Veen: "The large windows and spacious corridors make it an ideal building to allow the street life to pass straight through. The architect Maaskant meant it the same way. His idea was to continue the outside pavement on the inside. We want to explore this structure of the Groot Handelsgebouw at the city level." With several transformation projects in the centre of Rotterdam, plein06, in collaboration with the City Council and various project developers, is implementing the concept in practice. Along and through the buildings in question, publicly accessible routes to the roof are being created: green public space in the air. It's a start - just like a forest or landscape starts with young plant. In this way, smaller projects can become part of the Rotterdam city landscape and contribute to a busy but happy city.

Are you interested in plein06 projects? Figure out more about this innovative company on their website https://www.plein06.nl