In the Toronto Star, a Canadian newspaper, the City of Rotterdam’s vision on managing water is set as an example for Canadian cities. In the article, an overview is given of the used smart city tech – innovations and solutions to manage water in a city that is surrounded by water. Like Rotterdam, several Canadian cities also adjoin water. For those cities it is important to prevent flooding.

In the past decade, thousands of Rotterdam building owners installed green roofs. A striking choice, because usually green roofs are used to improve energy efficiency and to absorb carbon dioxide. This infrastructure however is all about water. The green roofs are keeping as much rainwater run-off as possible out of overtaxed sewers to prevent flooding. This is necessary, because roughly eighty percent of Rotterdam is below sea level. Paul van Roosmalen, city official overseeing sustainable public real estate, puts it like this, “the water comes from all sides. It has always been a threat”.

Rotterdam is working with public and private landlords to develop a ‘green-blue grid’. With this grid, roof areas can be covered in plants (green), but can also be equipped with reservoirs or tanks to retain excess water flow (blue). While the city’s blue-green grid is still far from completion, it may be seen as a compelling example of how a set of technologies can be harnessed to produce what can be described as a smart city solution to a pressing urban problem.

The technological linchpin in Rotterdam’s strategy has been the installation of a highly sensitive weather radar on the roof of the city’s tallest building. The device is capable of detecting rainfall 16 to 20 kilometres away. Remotely operated blue-green roof control systems can be programmed to dynamically respond to those forecasts and release water that sits in the reservoirs. In case of heavy rainfall, the reservoirs are empty and will retain rainwater, so that the aging and overloaded sewers can drain the remaining water.

The blue-green roof campaign is just one element of a wider set of Dutch policies that are meant to confront the potentially ruinous impact of climate change. The technology “is a means, and not a goal in and of itself”, says Rob Schmidt, the City of Rotterdam’s project manager for smart cities and the digital economy. The Netherland’s outlook can also serve as a model for Canadian cities and policymakers. Dutch governments are by no means indifferent to a potential economic windfall from the urban tech sector and have backed hundreds of smart city or digitization ventures.

Want to know more about the Netherland’s alternative power sources and its plans to future-proof cities? Click here to read more. 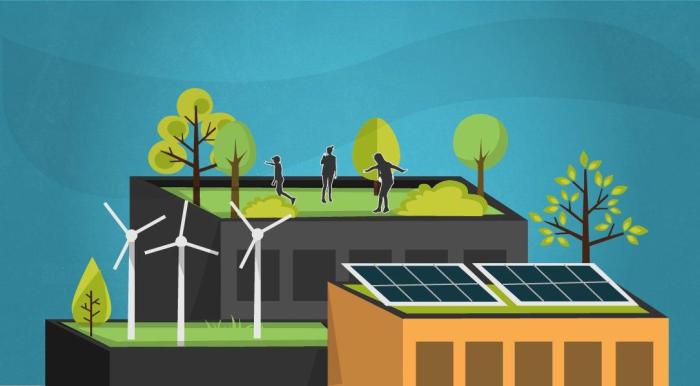